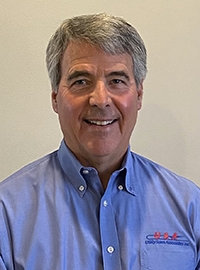 Matt grew up in Virginia and Pennsylvania where he graduated from the College of Engineering at Bucknell University in 1980. Upon graduation he was accepted in the Technical Marketing Program at the General Electric Co., and had positions with the Power Transformer, Lighting Systems, Medium Voltage Switchgear, and Meter Business Departments. In 1982 Matt became a sales engineer for GE in Beaumont, Texas, responsible for sales of power transmission and distribution products.

In 1986, Fisher Pierce hired Matt as their Eastern Regional Sales Manager responsible for working with all of the Fisher Pierce manufacturers’ representatives on the east coast at electric utilities. In late 1988 Matt relocated to Richmond to become a salesman with JB Sales Co., Inc. Matt called on electric utility accounts in Virginia and West Virginia, gaining excellent familiarity with the customers and product lines. In January 1990, Matt started USA with Alan Martin and Mike Cutright.

Matt is married to Patti, and they have two daughters and a son. They reside in Richmond, Virginia.

Install this application on your home screen for quick and easy access when you’re on the go.